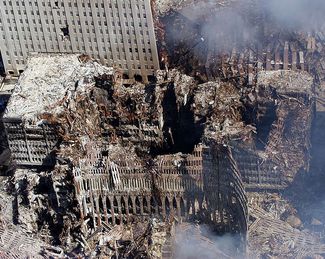 That was what we promised one another and the world as we felt the mix of boundless anger, intense sadness and togetherness we experienced once the fear and horror of that morning began to pass. We assured each other that we would remember the uniting impetus of our generational tragedy and we would never again allow the petty to blind and divert us from the importance of sharing, directing and protecting our heritage and our freedom. We cried for our fallen friends and family and wept for the heroes who gave all for us and those who stepped up to pick up the pieces and stand on the wall between us and our as yet unknown foe. We were sure that this horrible stain on our national consciousness would hammer home that principle of American unity and pride that had so long sustained our forefathers.

Never Forget! We will never forget. We will hold in our hearts the memory of those men and women who suffered through what must have seemed an eternity of fear, doubt and anguish as they waited for deliverance only to be shattered as those towers came down and stole them away from us and from the families and friends they left behind. We promised we would never forget those who would not face the flames as they leapt from the wounds and shattered windows of the towers while the world looked on in horror. We promised never to forget the shocked and bewildered residents who wandered about the streets of lower Manhattan unwilling to believe the stunning and heart wrenching tragedy they had witnessed. We promised never to forget the ones who would be forever denied the pleasure of seeing and enjoying the company of those who we lost.

We swore with defiance that we would never forget those brave souls who did what they had done every day of their careers until that morning when they rushed into the towers. They could not know that fateful morning would be their last time to face death. There would be no return for them and only mourning for their city and their nation. Still, we promised never to forget them for their bravery, selflessness and unbridled heroism. We promised that we would never forget the people on those planes whose only misfortune was timing; doing their jobs and living the lives they lived every day with no worries and not a care in the world other than those that life presented to each of us. W promised to hold onto the lives that were cut short and to be certain that those tragedies were not worthless. We extolled the virtue of our brothers and sisters at Shanksville and we promised that their willingness to sacrifice everything so that their tragedy was not spread to their fellow Americans would always be remembered. It was a good promise and well made. Those we lost deserved such promises and they deserve that we keep them.

We clenched our teeth and we growled through our righteous rage that we would never forget those who departed this world on that day. We further vowed that we would visit justice on those who had so cruelly planned and carried out these acts of terrorism on our nation. We did. We brought them down and it is good that we did. In no time and under no circumstances should we tolerate the force or violence of evil men. We can never bow or submit to their machinations. More important than the rest, however, we must never forget.

We must never forget that we are Americans FIRST. We are the descendants of people who tamed the wilderness. We are the progeny of people who braved the vast and unforgiving oceans of the world and carved a great nation out of nothing. We are cut from the same cloth as those who fought the greatest empire of their time with local militia hammered into soldiers by great leaders and their lust for freedom. We do not stand on the sidelines and observe history. This is not the heritage of the American people. We make history. We decide the path of events and we make for ourselves the nation and the life we wish to live. We are strong each of us in our own right but we must never forget that as AMERICA we Americans are more than strong — We…ARE…MIGHTY!

We promised to remember. We swore we would never forget. We vowed to make it right and continue on in their name. What we forgot was that only some of the names came from lower Manhattan, DC and Shanksville. We must never forget those we lost that day. As we remember them, however, we must also remember and never forget all those who have gone before. We owe our lives and our freedom to those who sacrifice for us every day be they standing a post on the wall that surrounds our republic or keeping that republic moving. We must begin to deny aid and comfort to those who seem only intent on tearing us apart; both within and without. Part of that memory is recalling our unity and carrying forward with that ideal and that dream that we are Americans first and partisans last; if at all.

We must never forget. We must never give in to those who would destroy us. We must hold on to what unifies our republic and we must go forward as Americans in freedom and victory.